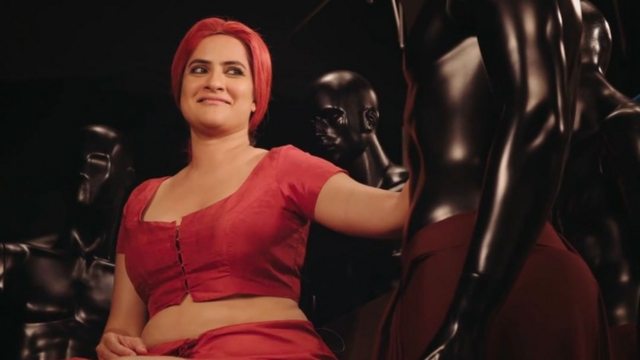 By Deepti Gupta with 8

Despite all efforts for women’s emancipation and the increasing relevance of the conversation on feminism, India remains a deeply misogynistic and sexist society. While we strive for change, to usher in equality, the role of art gains immense significance as a tool capable of invoking powerful thought which has the potential to lead to action, and eventually, reform. The documentary Shut Up, Sona attempts to achieve the same, to question the status quo of inequality and sexism, and succeeds most brilliantly in making its point. The narrative follows the life of Indian singer and musician Sona Mohapatra and raises deeply disconcerting questions about the gendered nature of art in contemporary times.

The scene is of Sona’s house where she discusses a legal notice with her husband Ram Sampath, also an accomplished music composer. As our protagonist introduces the viewer to all that she is being alleged of - singing a song as old as several centuries, and devotional in nature, in what society deems to be ‘inappropriate’ clothes and make-up, you are allowed to share her combined rage, disappointment and hurt.

The story of an artist condemned for blasphemy over a piece of art that did not sit well with the times is not a new one. Yet, as Sona points out, in twenty-first century India, male artists are allowed to get away with much more than their female counterparts. It is not about religion or a religious figure, it is about being a woman, it is indeed about gender, as the documentary itself points out.

As the narrative progresses, it touches upon several aspects that a woman singer or, as a female voice (surprise, surprise!) is heard announcing while introducing Sona, “songstress”, has to deal with while trying to make herself heard in a predominantly male field as well as world. There is a sense of validation, emancipation and empowerment for women, in particular, and the marginalised in general, to be found in this deeply poignant narrative where Sona refuses to relent, to give up, to break, to “stay in her place” despite all odds.

She may be questioning the qawwals in Delhi’s Nizamuddin Dargah where women are still not allowed inside the inner sanctum, but a calm smile will not leave her face. She may disagree with her husband’s approach to let the allegations and accusations blow over, to not say a word, but it will not alter the course of her fight. She may revisit the close confines of an old hostel room, find herself break down in it, yet find it in her to smile for the selfie-camera a young girl has directed towards her.

There is a sense of self-awareness in Sona that makes the narrative more meaningful than it already is, that protects the film from being threadbare, hackneyed and preachy. Instead, it is powerful, ensuring that the viewer finds themselves questioning why only a woman’s presence is not sufficient on stage, why she has to seek validation and acceptance, not through her art, hardwork and skill, but by using male presence as a crutch, why any attempt to break away from it would incur upon her the condemnation of her family, society and loved ones.

Sona is fearless in calling out people who do not stand with her. Her anger is almost like a character in the film which supports the narrative most wonderfully. The film takes you into a tour of her disagreement with society, it leads you by the hand into an understanding of it, breaking it down for you bit by bit. This harsh truth that the viewer is forced to swallow like a bitter pill is juxtaposed against her melodious, soulful singing to the point that every time Sona opens her mouth to sing, the viewer is not far from goosebumps. Consequently, the documentary becomes a strong, pertinent comment on society and the manner in which it locates women across different fields, age groups and social positions. The protagonist, her talent and her rage all enhance it further making it a wholesome, relevant product.