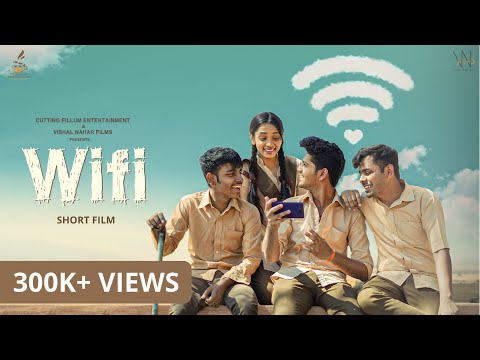 By Cutting Fillum with 7.1

Against the hinterland of 2014 rural India, when it is still untouched by technology and the internet, and is instead marked by child marriages and walls covered with social messaging about covered toilets, the film allows its narrative to develop. One morning, three school boys (who choose to refer to their eleventh grade school as 'college', a notably authentic touch to the story), find a smartphone.

As a scuffle ensues regarding the ownership of the phone, the desire for internet has also begun to stretch its limbs in their imagination. While the story is still establishing its premise, a new girl comes into the village and is soon the inhabitant of the only house with a wireless internet connection in the area.

The film, marked by its lovely visuals and camerawork, allows the WiFi at her house to be the common pin that holds the entire plot together. It is also the pivot on which the film rotates, bringing in several emotions - of friendship, young love, loyalty, mischief and an eventual acceptance. It is fresh and contemporary of the right kind in its premise, sincere in its attempt to localise the story and successful in tying all of these elements together in an organic, cohesive narrative.
Read Less