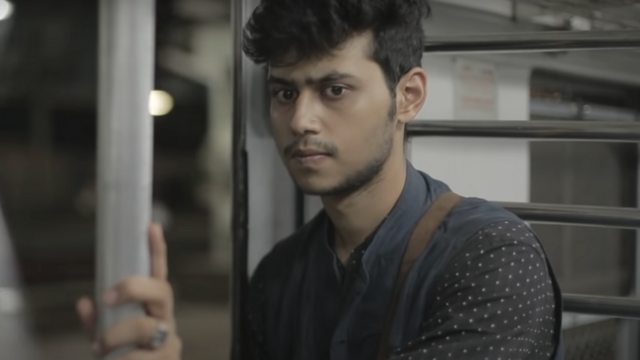 By Faraz Arif Ansari with 7.2

Sisak is a conversation that is marked by its complete absence of dialogue. It is constituted by tight shots of empty compartments, a loosely clenched fist, of crisp formal button-downs contrasted against patterned kurtas, kolhapuris against polished, grim shoes, dark against light, of silence and all that it conveys, and so much more. The film also does a notable job of tricking the viewer into reflecting upon their own gendered conditioning, to allow a particular kind of kolhapuri, a polka-dotted kurta and an ornate ring to be a suggestion of femininity, only to then be surprised when its bearer is revealed to be a young man. And yet, that is not all Sisak is about.

It portrays for you the power of a single exchanged glance, the lastingness of it, despite and because of the complete absence of any words. Any conversation that comes to take place is thus simply confined to stolen glances.

There is further an interaction with the poignance of longing, alongside the fragility of the self and the vulnerabilities that constitute it when it is exposed for another person. The hesitation and attraction the film deals with serves another purpose, one of normalising queer identities.

The attraction Sisak engages with is not limited to the characters' gender identities, but is simply one that exists between two people. Yet there is a rejection, a denial, even if first in the heads of the characters themselves before it actually takes the form of action.

This, in turn, serves as a disconcerting reminder of the world we inhabit, one which does not allow any kind of questioning of its heteronormative structures, and it is in this moment, this realisation between the sentiment of love and the restrictive society it exists in, that the film becomes all that we need art to be - questioning the predominant societal structures that refuse to budge in their rigidity.

The narrative takes its time coming into its own, but never leaves the viewer distracted for a single moment. The absence of dialogues is easy to get used to for emotions and gestures are sufficient to take their place - from hesitation, to nervousness, to pain, to love. The chemistry between its only two characters is palpable despite the physical distance between them. It is in the unfurling of a finger, in a single step taken towards each other, and most importantly, it is in the waiting. The background score towards the end falls a little out of synchronisation with the rest of the narrative which has been marked by its subtleness all along. The track borders on sentimentalism, perhaps one that has been intentionally introduced in the hope of building up the crescendo for the viewer, but it might not always work for all of them.
Read Less