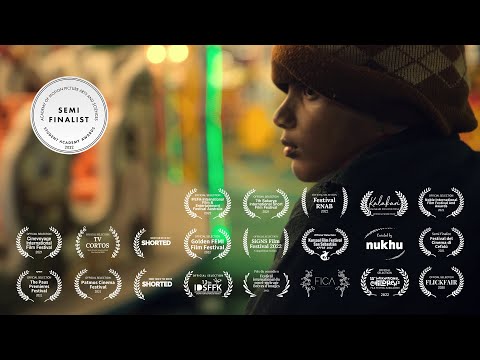 By Pranjal Joshi with 7.1

Three orphan boys, who somehow fight back the many obstacles of penury to survive, one day scrap enough money to visit the local carnival. As Monty, Kamal and Kunnu reach the fare, little are they aware of how an entry ticket too has to be bought first.

Spending all their money at the entrance itself leaves them with none for rides or other colorful, dazzling attractions the space holds. As they move from one mini-adventure to another, vicariously enjoying the fare through other patrons, while also longingly staring at the families and children who got dealt a better hand at life than them, the visit nevertheless becomes full of surprises and twists. All of these visuals enjoy the portrayal they deserve with sophisticated camerawork and a judicious use of a very young cast.

Things finally come to a head in a high-paced chase scene which completely alters the course of the night, and perhaps, also the lives of the little boys. As the older boy comforts the younger one with truths he is not entirely sure of himself, the viewer is allowed a poignant moment where a child is deprived of the innocence of childhood, and forced by the many cruelties of the adult world to acquire the role of the protective caretaker. This protectiveness is evident right from the very start; the undeniable sense of the three of them against the world pervades the plot, allowing us an endearing story of friendship, camaraderie, but one which is cut too short too soon by tragedy.
Read Less