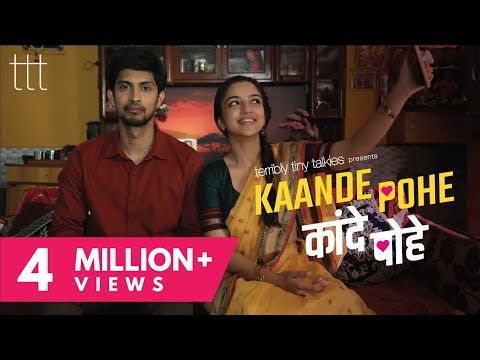 By Shubham Yogi with 7.3

A common thread for all successful romance stories are the nuances and subtleties that are employed in telling them. Among its other strengths, this is the first thing Kaande Pohe captures most effortlessly. Add to it convincing performances and chemistry, and there is little that can go wrong.

The scene is set for a meeting between two families for the arranged marriage of their children. This in itself is not an entirely unique subject matter for a short film. However, when the film manages to still tell its story in a completely new fashion, it deserves all the brownie points. It is further a comment on the deep infestation of technology, smartphones and social media in every aspect of our lives.

While the previous generation, or as the internet would call them, "boomers", fail to understand the charm of these modern values, seemingly in direct contrast with the sanskaar that is expected of a young woman preparing to get married, the millennials have decided to sink their heels deep into the ground, refusing to budge. With its lovely colour palettes, calm storytelling and honesty in building the narrative, the film is the warm fuzzies you need this Valentine's Week.
Read Less