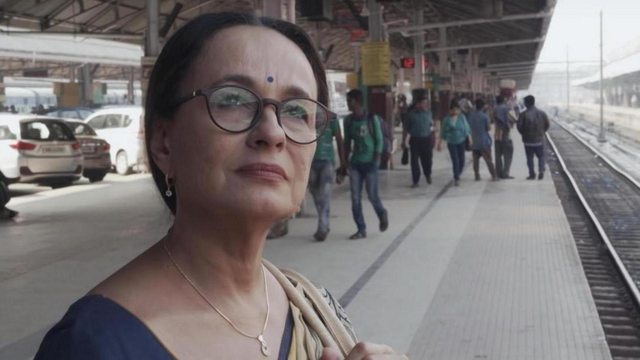 Yours Truly is a film that finds itself thrust under the genre of romance, as its 57-year-old protagonist Mithi Kumar (Soni Razdan) quietly pines after a man she’s only ever heard, but never seen. She hears his voice over the station speakers every day on her long commute to work, and over the years, develops an ineffable connection and attraction to this invisible “announcer”. She regularly writes him unreserved and intimate letters where she pours out as much of her heart as she does of the deep, reflective musings about the world. She imagines him addressing her personally over the speakers - teasing, chastising, and guiding her through her day-to-day activities. However, the station announcer never writes her back, and his private messages in her fantasies are never recreated in his public messages over the station’s speakers.

The film only fits in the romance genre by how prominently Mithi’s life lacks it.

The opening scene shows Mithi lying motionless in bed, as a train rushes by loudly outside her window. This is a predecessor for much of the film to come – the world moves along at a pace not in sync with Mithi’s, while she remains stagnant, shielded under her gauzy mosquito nets, quiet teas with biscuits, lonely train rides, and long nights of listening to her loud neighbours in bed while craving the touch of her faceless man. It is an empathetic exploration of loneliness – a loneliness that clearly weighs heavily on the protagonist – but a weight she doesn’t seem to mind.

She makes no effort to rectify her isolation. She refuses to reciprocate her tenant, Vijay’s (Pankaj Tripathi), forthcoming behaviour and attempts at conversation; she doesn’t try to seek out and meet the “announcer” during the many years of being infatuated with him; she doesn’t seem to own a television set or laptop; even after her vivacious younger sister, Lali (Aahana Kumra), presents her with a new phone, Mithi doesn’t feel the need to use it to relieve the loneliness of her long, daily commute on the train and ferry, where everyone around her is mindlessly scrolling through their phones or listening to music to pass the time.

Mithi seems to be living in a hangover from a fantasy world that she wishes existed – a world that is not obsessed with gadgets, where a woman doesn’t have to be alienated in her workplace from all her male colleagues, and where love letters are not only written, but also reciprocated.

There is a scene in the film where Mithi looks on at a dead body being transported on the train. As a jolt displaces the sheet covering the body, revealing the corpse’s face, Mithi immediately gets up to cover the body with her newly purchased quilt – an act of pure kindness, if it hadn’t been for the look of paralysing fear in Mithi’s eyes when staring at the corpse’s face. It is unclear whether she struggles to sleep that night because of being exposed to the cold without a quilt, or because of the memory of why she doesn’t have one in the first place.

Perhaps she’s afraid of how the dead body symbolises her future; perhaps she’s even more afraid of how the scene resembles her present. Whether it be familiarity, or fear of the future, the emotion in Mithi’s eyes when she looks at the corpse is one perhaps also reflected in the viewer as we watch Mithi’s life, love, and loneliness unfold in all its comfortable silences and disconcerting mundanity on-screen.