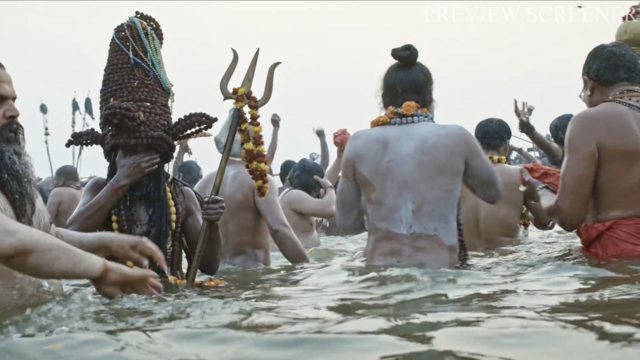 By Kamal Swaroop with 6.9

The film follows a troupe of theatre actors rehearsing their performance for a play based on the Hindu myth of the “churning of the ocean” or ‘Samudra Manthan’, to be performed at the infamous Kumbh Mela.

The dialogues are belted out with over-emphatic enunciations, the gauche dancing is masked by confidence, and the economical wigs and costumes secured with safety-pins.

However, while the actual play being filmed feels amateur, the film never does. Each scene is shot with a sort of effortless precision. A dialogue is heard being delivered off- screen, but the camera chooses to focus on the reaction of the other performers instead.

As the dancers dance lithely, the camera closes in on just their feet hitting the ground rhythmically or gesticulating hands. You’re unsure of what the film wants you to grasp at, but never too distracted to attempt to grasp it. The scenes of the crowds pushing their way through a train station, and the crowds in the Kumbh Mela, are shot in close-up shots, automatically conveying the dizzying suffocation in the two intensely populated places.

These are almost immediately followed by wide, high- angle shots of the station and the mela, and the same crowd is now colourful ropes of people moving at a leisurely pace.

The film repeatedly tugs you into its world, just to then keep you out of it – much like the actual churning of the ocean.

The stakeholders in the play, from the director and writer to the actors, seem to have embraced the camera following them around – they largely ignore it and don’t acknowledge its existence. Everyone outside of the play however, from the middle-men to the people on the streets, constantly do double-takes and look right at the camera – some even holding up their own mobile-phones to film the filmmakers. People’s phone numbers are said out loud as if a camera isn’t filming everything, but a man defensively asserts that he doesn’t chew tobacco or litter while consciously eyeing the camera lens. The fourth wall seems to be a holographic one – you’re convinced its solid just as someone walks right through it.

The film is a subtle, yet unabashed, commentary on religion. While the origins of religious myths might transcend boundaries, prevailing across cultures – as is mentioned by Abhay Tiwari explaining how the myth of the “samudra manthan” seems to merge with those in Greek and Chinese mythologies – rarely do they find as arduous, devoted, and terrifying an execution as they do in the Indian culture.

Though the film documents the rehearsals of the play to a tedious degree, the final play being performed at the Kumbh Mela is barely filmed, choosing to film the mela and its people instead, while the play’s dialogues are heard in the background. The mela itself, then, is the main performance.

Where the play has a “sexy Shiva” concerned about his wig potentially falling off, the mela is populated with real people whose hair grow in long dreads, whose faces are painted a ghostly blue, and whose every move feels like the tandav. While the performers tug at the makeshift snake clumsily to churn the ocean on-stage, women in the mela roll out long snake-like ropes of dough as machines churn out cut vegetables.

The boiling hot oil frying puris look much like a frothy ocean being churned. As the procession of pilgrims marching to fervent chants of “Har Har Mahadev” move in one direction, the Ganga River flows soothingly in the opposite direction, creating an illusion of circularity – a push and a pull.

The real “samudra manthan” then lies in an everyday performance – both mundane and religious. The only difference is that attaining the ultimate elixir that emerges from the churning is a certainty in the play. It’s hard to know if the devoted churning of the mela’s metaphorical ocean will bring any “amrit” to its churners, or what the “amrit” even is. The play reaffirms the pilgrims' belief in these religious myths. The film, on the other hand, aims to help us question them.