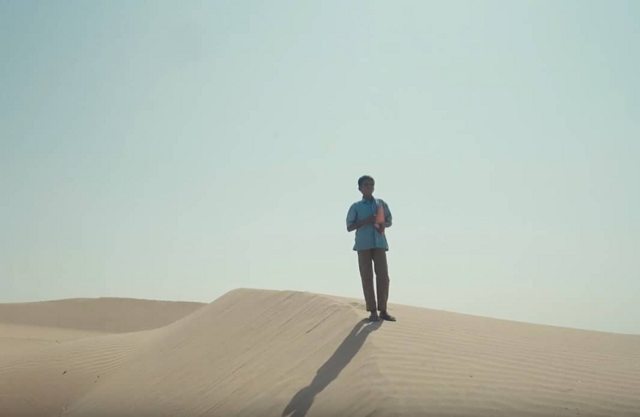 Pearl of the Desert

By Pushpendra Singh with 8

Pearl of the Desert is a documentary film set in the beautiful barren expanse of the Thar desert and is about a community of lower class Muslims Manganiyars. Historically marginalised and forced into depending on their patrons for sustenance, Manganiyars are musicians and are mostly found in weddings and other ceremonies, playing to an indifferent crowd.

The Manganiyars cut their crops (opium usually) while singing songs passed down from rich oral traditions, while their children play kabaddi and sing Bollywood songs. It is clear as day that the traditions are endangered, of either being stunted or being forgotten. However the film does not take such a simplistic stance on the subject. Instead, it is focused on Moti Khan, a gifted child, determined to make a career in music, despite all the social injustices and systematic oppression that afflict his community.

The masterfully made film begins with Moti's mesmerising voice against the visual of a seemingly endless desert. He practices his singing with his father. Early in the film, he skips school to sing, only to be scolded by his father (in perfect meter and immaculate rhythm.)

The cinematically shot film would almost make you forget it is a documentary, and perhaps, it is not one in the traditional sense. It uses non-actors and employs interviews between them, but the camera itself is one of the most potent storytelling devices in the film. It regularly walks off to explore the surroundings, much like a Terrence Mallick film, enhanced further by an incomparable musicality.

The sound design of Ajith Rathore builds an unparalleled narrative out of rustic, folk tunes with shots of sceneries that must have inspired them generations ago. Pushpendra Singh understands the community deeply, their conversations that happen in meter, their sensibility and their art. The intimacy created is one that is thoroughly earned. A good example here would be its gut-wrenching portrayal of a music school for the community, along with its sage-like caretaker, that runs without funds in Berna.

The scenery is sketched across the screen as potently as the music and poetry that tie up the film together. Loosely bound by a narrative and interesting title cards, the film explores with an austere discipline. Stories coalesce to form a narrative of the Manganiyars.

There is no right way to protect a culture. The Manganiyars desperately keep the traditions alive through their own sheer will. Moti refuses to go to school to pursue music, despite his father's apprehensions, while his uncle plays at wedding ceremonies. The school at Berna tries to preserve age-old songs in books as the text threatens to fade away from their yellow pages.

The film also explores art in freedom and art as a performance. Moti is an immaculate singer in the open, under the sky sitting on a mound in the desert but he sings off key in ensembles and studios. Pearl of the Desert's story is ultimately about music, and how it affects the Manganiyars.

They believe themselves to be destined to be subservient. Pride is a taboo for them, like many other artists. Perhaps it is so ingrained in them that they will never change their art, never revolutionise it. It may have preserved the art, but the artists never quite grew as much as they should have. And that is the quiet tragedy of the film.