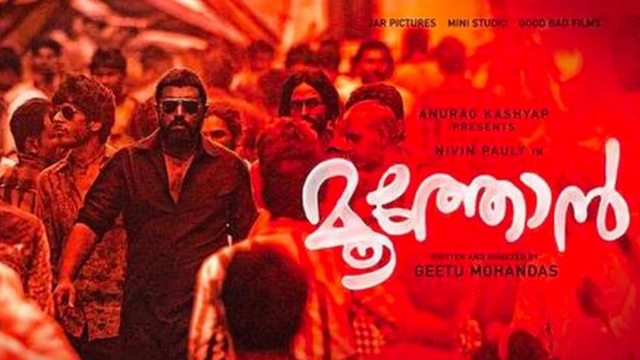 By Geetu Mohandas with 7.8

The point Moothon starts off at and the story it ventures into eventually are so fundamentally different that any details would take away from the experience.There is no question about the ambition of the film. It is hard to pin down the film to a particular genre or language. It is as much a Hindi film as it is Malayalam. It is a drama, a mob flick and a social commentary. It should also be noted that Malayalam star Nivin Pauly has redefined himself to play a challenging role that challenges conventions, both of the industry and how films are made.

Moothon is set in a peaceful part of Lakshadweep. However, we are quickly introduced to the world of the protagonist Mulla, an introverted kid. Bullied at school and ready to be sent away from the island by his caretaker, he yearns for an identity. The story of Mulla in itself is harrowing, but as soon as the audience starts to settle with the lush cinematography and the tranquil, slow life of the island, the film takes an interesting turn.

From them on, it is a film that covers new ground constantly and very competently. Its focus is never on one place or a particular story. Ultimately, it tackles the life of the island and juxtaposes it with Mumbai, its underbelly and crime syndicates.

Influences are easy to find in the narrative. The film evokes memories of Salaam Bombay. The mob children run around like in City of Gods, the villains and heroes are active volcanoes like in Satya. Additionally, Anurag Kashyap staples can be found as well, but not with the earnest heart they come with in his directorial ventures.

Mumbai is seen at its darkest, dingiest and most volatile. The brilliant cinematography of Rajeev Ravi keeps the claustrophobia of Mumbai’s crowded and coagulated spaces intact, while maintaining meticulous attention to detail. The editing is fine-tuned, but the pacing of the film takes a hit, no less thanks to its unorthodox script that goes back and forth between high octane chase sequences to peaceful conversations on a beach. The background score too is a nuisance in an otherwise smart film. It dictates the feeling a scene must have, ultimately having the opposing effect.

The actors, however, drive the point home. Pauly can blow up and sit in silence with the same effect, and Roshan Mathew stuns with his elegant vulnerability. The child actors work well within the film and Shashank Arora delivers yet another great performance.

The narrative never unfolds in its entirety. Geetu Mohandas brilliantly withholds information and introduces red herrings, visually and with the story. The film ventures into themes that are unimaginable in its first act, and eventually provides the audience with memorable twists. However, despite being an ambitious film that will haunt you long after you are done watching it, Moothon remains a hard film to watch with no light at the end of the tunnel.