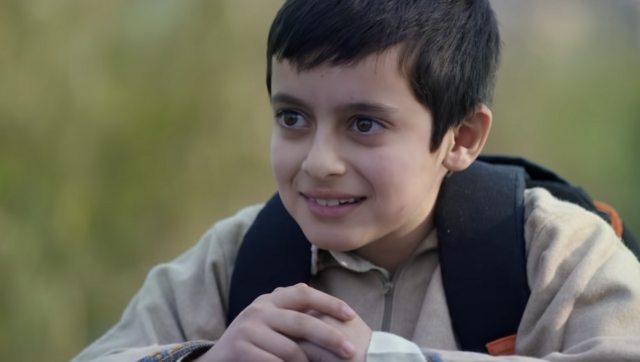 By Aijaz Khan with 8

Hamid is an achingly beautiful film about love, loss, faith, duty, and keeping humanity alive in a climate of injustice and dangerous politics. Adapted from Mohd. Amin Bhat’s play ‘Play Phone No 789’, the film follows a seven-year-old Hamid (Talha Arshad Reshi) in Kashmir, trying to find his footing in a world where his father has gone missing. Unable to comprehend the implications of his father being taken by the police, or his mother’s (Rasika Dugal) isolating grief as a half-widow, Hamid embarks on a quest to get his father back. When told that his father is with Allah, Hamid puts two and two together, and calls Allah’s number – 786. His call is answered by a CRPF officer, Abhay (Vikas Kumar) who decides to play along, and an unlikely connection blossoms between the diametrically opposite individuals.

In recent years, without a doubt, if there ever was a region creatively and emotionally exploited by filmmakers, “hami asto, hami asto, hamin ast” (it is here, it is here, it is here). Kashmir has become a touchstone for creating darker, more relevant content for artists, focused on emotionally overwhelming their audiences rather than actually tapping into and depicting the raw reality of Kashmir.

Hamid manages to never lose sight of the issues that allow its protagonists’ story to exist, without continually exploiting them. The film rests on Hamid’s belief that his father is in “jannat” with God, but everyone other than the young boy is painfully aware that his father is merely a casualty of the conflicts in “Jannat-e-Kashmir”. Hamid, his parents and their story are casualties of Kashmir’s trauma; his grief is almost an archetypal one – part of a collective subconscious of the Valley. The use of a child’s lens to view dark and traumatic events isn’t a new concept, but Hamid never treats its foundational concept as something unique or ingenious.

The cinematography is wonderful, bringing something novel to even the cliché, quintessential 'Kashmir shots'. As engaging as Hamid’s humorous naivety and heart-breaking determination is, the film dominated by long shots engulfs him in Kashmir’s expansive greenery and tumultuous politics. Rasika Dugal’s performance is phenomenal; every posture, every expression and every move exude destitution and resilience, anguish and numbness, heart-break and anger, all at once. Reshi is an impeccable Hamid; he plays the part of an innocent and stubborn child with surprising maturity and intuitiveness.

The film truly is heart-breaking; I’ve watched it thrice in the span of a year, and I’ve never managed to hold back my tears when Hamid reads out a letter he’s written to his father, begging him to return, when talking to “Allah” on the phone.

What is even more heart-breaking, however, is the fact that when Hamid won a National Film Award for best Urdu film and best child actor in August 2019, the filmmakers were unable to communicate the celebratory news to young Talha Arshad Reshi – a resident of Kashmir - owing to the state-wide lockdown and internet shutdown in the region.

The helpless anguish depicted in the film extends to reality, especially today, when Kashmir’s state of affairs has so quickly barrelled out of control. Like most films based on Kashmir, the conventional happy ending is not possible for a film like Hamid, as there hasn’t been a happy beginning, middle, or end for Kashmir. Giving in to the grief, burying the past, and moving on seems to be the only form of closure a film like Hamid can offer to its characters and viewers.