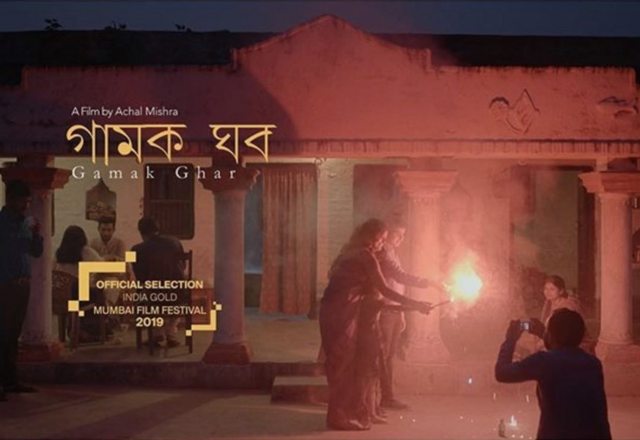 By Achal Mishra with 7.6

Gamak Ghar’s charm lies in its simplicity, its ability to stick to the very basics of filmmaking, showing what the medium is truly capable of, even in its most elemental form. It is like making sushi. How much flavour can you possibly derive from raw fish and steamed rice with a few drops of a bland sauce? Enough to rule the world. However, when it comes to art, we might need more than just sauce.

Achal Mishra, a twenty-three-year-old debutant director, might be walking towards that coveted mastery. His film reminds one of the monk-like tranquility of Yasujiro Ozu’s films. There is a surety to his craft. The bare, most conventional elements that the masters of cinema have played with are used innovatively and appropriately in his narrative.

Gamak Ghar is the story of a family during three different time periods (spanning two decades) and the way they come together in their ancestral home for important family functions.

It is a house built by a man mythologized in the first time frame (1998) itself. He was a playwright, and a respected resident of a small village in Bihar. His simply yet elegantly constructed house now sees his grandchildren play hide and seek in its nook and corners, while the memory of his death looms large over their parents’ memories.

The film is as much about the house itself as the family. Its progression through the decades is harrowing, from a lively place full of light and life, to a gloomy, deteriorating shell of itself. The family members move out one by one, some die and the house, which represents the roots of the family, slowly withers away with the passage of time.

Foundations laid by the grandfather lose their strength. The subsequent generations seek out a new life and foundations elsewhere. Places, much like people, often die of natural causes, finally embracing their end when and after they are remembered for a last time.

The narrative is also about progression of memories. Recent memories are often vivid, and induce immediate emotions. The further they go from us, the more visceral they become. Some emotions become nostalgia and acquire a strange sense of dreaminess that belongs to neither the present nor the past.

They are as much imagination as remembrance. Their records are found in old cases catching pests and rotting with time. Their impact remains poignant. Eventually the bittersweet moments become afterthoughts that one carries in the back of their mind, but unable to ever express them out loud.

The film is brilliant in its simplicity. Anand Bansal, the cinematographer, austerely uses frozen frames in confined spaces, meticulously fixing his shots to perfection. The use of aspect ratios as a storytelling device works splendidly (the aspect ratio goes wider with every time frame, as the family spreads out to different areas, and as there is more emptiness in the house to cover). Brilliantly directed, the earlier shots are tighter, more focused and filled with people. The wide frames accentuate the emptiness of the house in the latter parts. Natural elements like fog, darkness and dust are used in their tradition sense.

Certain shots are used again and again, each time with the house in a different condition, to show the passing of time. It captures corridors, verandahs, and tulsi plants that die and are born again in the same pot after decades.

There are themes and motifs to be found throughout the film, like in the subtleties of real human behaviour. A cast of actors and non-actors are left to their devices to compose scenes in an extremely authentic fashion while the camera acts as the eyes of the walls. The excellence of Gamak Ghar is in many things. However what makes it truly special is the universal story it so convincingly tells, and the simplistic mastery of craft it uses to tell it.