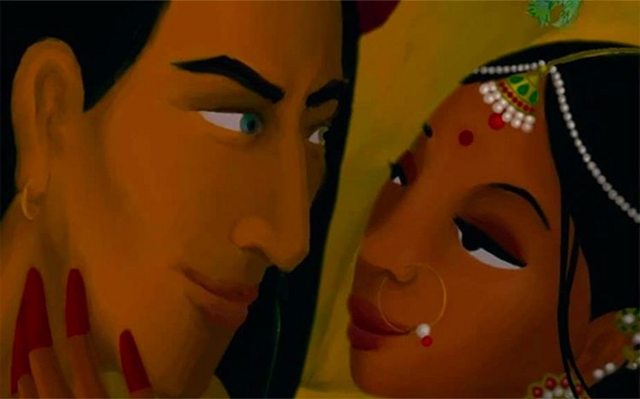 By Gitanjali Rao with 7.9

In cinema sometimes less is more and this rings even more true for animation. Most blockbuster animation films market themselves as being hyper-realistic, but often only provide lacklustre results. Animation works at its best with a clear stylistic vision. Miyakazi's Spirited Away looks completely different from Up. Both are great films in their own right and that is the flexibility of the medium. Geetanjali Rao has done the same with her hand painted animation film.


'Bombay Rose' has wonderfully used Indian pulp magazine art, comics and vintage movie posters for reference points for Mumbai, painting the landscapes and figures with blurred lines while keeping the characters' features sharp and well defined. Shadows and depths are painted religiously, frame by frame. Some sequences even find inspiration in folk art and Mughal art of miniatures and side portraits.

The stylistic choices give the film a look that is groundbreaking in Indian animation. It oozes the flavour of Mumbai in a manner that an amalgamation of different cultures becomes a towering presence in the narrative. The soundtrack features songs from Goan music, groovy and erratic, juxtaposed against a Hindi heartland ballad invoking Maa Rewa(Narmada) on a modern rendition.

The film revolves around three characters, Shellie D'Souza, Kamala and Salim who are tied together by, among other things, a rose. The brilliantly chosen characters allow an exploration of different parts of Mumbai.

Miss D'Souza clings to a glorious past. She reminisces a retro Bollywood film she starred in with the love of her life. Her memories are haunted by the days far gone. Piece by piece, she pawns her invaluable relics that no one really buys. Her narrative progresses to reveal that even her house is a symbol of the city's past - a garden where fresh flowers grow only to reach a graveyard.

These flowers find Salim, a migrant with a tragic past, and then Kamala. Both are outsiders who come to the city, the land of opportunity, seeking escape from a terrible life. Similar to countless other films, they find themselves stuck in the city's ugly underbelly. This interaction between the old and the new isn't merely black and white. As dance bars are replaced by high-end clubs where dancers continue to get trafficked, vices of the past persevere for an existence in the present.

All three characters come from different religions and social strata. Their stories coalesce into a larger picture of a city's consciousness - one that is dying and rejuvenating at the same time.

Miss D'Souza is a doomed romantic who walks through the streets as we see them returning to how they looked in previous decades. Salim and Kamala often find respite from their mundane daily lives through fantasy and escapism. Salim seeks solace in movies and imagining himself in legends of heroes; Kamala fantasises about being a rich bride in the Mughal era.

As these fantasies exist in the world of crime and moral degeneration, one as real as the other, Gitanjali Rao fluently moves from fantasy to reality, often blurring the line between the two and splashing paint all over the screen.

The screenplay is tight with the visuals threaded together so fluently as if they are a part of one gigantic canvas, where colours dictate the cuts, not a camera. The narrative moves freely from the story to fantasies or extended sequences with roses to dance numbers. The real achievement of the film, however, is the homage it is able to pay to Indian cinema, to Mumbai and to the diverse people who inhabit it.