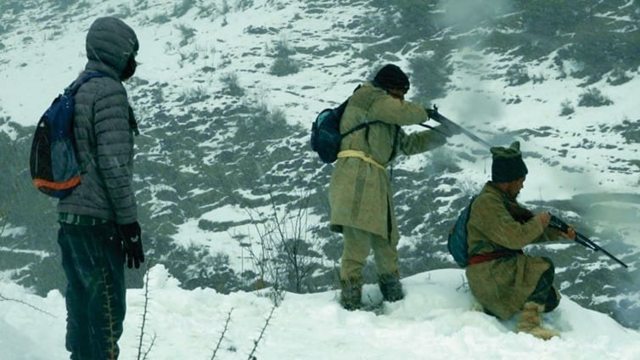 By Gurvinder Singh with 7

There is an innovative genre of films coming up at the festival circuit that seems to have taken a different and quite interesting turn in India. These films are set in unexplored spaces, use non-actors, delve deeply into a community’s day-to-day life and struggles, and bind it all together as a mix of documentary and fiction.

Done right, this innovation can become a splendid amalgamation of the best of both worlds - the richness of themes and motifs of a documentary, and the depth of a strong narrative structure of fiction. Bitter Chestnut, however, unfortunately is not a good example of this genre. Gurvinder Singh (of Chauthi Koot-fame) has taken a turn away from his usual style to make this film. It starts off feeling deeply personal, and contemplative. A young boy Kishan who is seventeen is adamant not to join his family profession and instead wants to continue working at a restaurant. He lives in a village in Kangra, Himachal Pradesh, and the restaurant is in Bir, hours away.

The film contrasts modern with the traditional. A world where humans are one with nature and live in harmony with it. The urban space, on the other hand, is shown to be possessing both virtues and vices. A subplot involving the restaurant owner who willingly found refuge from the life of metropolitans in Bir presents a counter argument to Kishan’s wish of leaving his village.

The core conflict is too thin and a little too overdone to work. Still, it is a premise that could have turned out differently. The parts where the film digresses from the main plot are the best. The portrayal of Kangra's culture, its poignantly portrayed people and customs stand out and stay with you. The filmmaking is organic, and the vulnerabilities, idiosyncrasies and profoundly human tendencies of the characters that bind them together become part of a universal and relatable experience, making those parts worth watching.

Unfortunately, they are a bit too strong for the plot itself. The protagonist is shown to face no conflict throughout the film. All his struggles are very internalised, and the filmmaking is detached enough to never allow the audience to step into his shoes.

Every time we see Kishan feeling claustrophobic and stuck in his village, we see tone deaf images of lush heavenly mountains where he lives. The story would like to introduce a conflict, but the camera does not believe there is one.

The result is a protagonist who remains unnoticeable and unrelatable. Instead the subplot with Monisha, the restaurant owner, serves more of a purpose and soul than the portrayal of the protagonist. She religiously listens to the stories and discussions of the tourists who come to her restaurant. They range from western spiritualists seeking enlightenment, hippie musicians to art aficionados looking simply to have a good time; she listens to them and learns from them. She has built a quaint little life for herself in the mountains, and in her last days, only desires its peace.

The same kind of insight is never given to Kishan. After a point, the debate between modern and traditional ceases to offer anything interesting and becomes a burden to carry. The title of the film is explained in a conversation that comes out of nowhere, with little build up. Bitter Chestnut is a competent study of a community, and human condition, but it falters as a film.