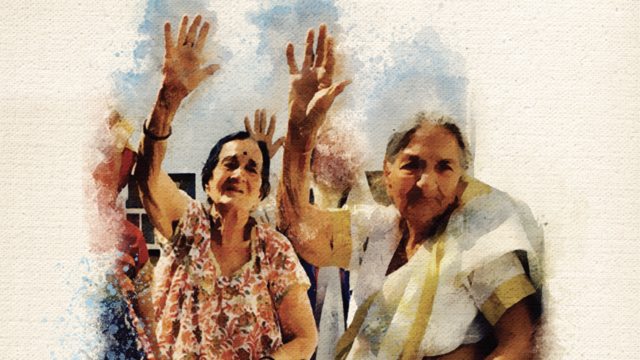 By Tanuja Chandra with 8

Tanuja Chandra's documentary ‘Aunty Sudha, Aunty Radha’, follows her real aunts who live in a rural part of North India along with a retinue of their domestic helpers.

The two nonagenarians are the centre of a peculiar, little, self-sustained community in Mathura. All of their household helpers have been there for decades. They work with reverence, making serving the two women seem almost like a devotional ritual.

In return, for their sustenance, the vast farmlands in the property are equally divided to provide them surplus crop. Aunty Radha’s son, who devised the arrangement and bought the property, frequents them once a week. Rest of the time the house is run at the whims of Sudha, the younger, much more dominant sibling.

It is a unique set-up, one that most people cannot hope to afford, but that is not the point of this film. It is about what truly matters in life. The relationship between the two women is explored simultaneously in depth along with the everyday occurrences of their life and times. It is a symbiotic dependence of two souls that have been together for ages, and cannot fathom to be apart. In each other, they have found a reason to make the rest of their life worth so much more. Perhaps it is each others’ company that has prolonged their lives, and kept them healthy.

Chandra’s care for the subject is translated well into the film that is profound without ever trying. The film’s grammar feels as delicate as blown glass. It treats its characters with affectionate care, love and a sense of security that pervades throughout.

Life is alright in this little community and there is nothing else, but all-pervasive positivity that has made its home there. The experience of being part of a loving, synchronised community is visible in the household helpers. The cook who knows she will never quite satisfy Aunty Sudha’s demands, the experienced gardener who is happy to tend to flowers and laugh at the women's quips, another helper who is much closer to the old women and understands the responsibility that comes with it; the sense of spirituality of daily life is found in every member of the house.

Through characters that are old, and preparing for the ultimate eventuality, the film affirms life itself in its most rudimentary form. Happiness is not only to be found in success, or grand events that surround one, but merely the conscious act of living for oneself, and being there for the people around you is sufficient. This film is an experience that places one’s faith in living, and in the ordinary, mundane experiences of life that remain grossly underrated.