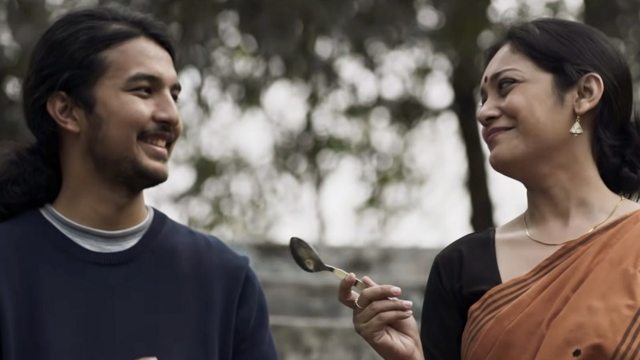 By Bhaskar Hazarika with 8.2

There is nothing in the world that can prepare one for the brilliantly disturbing allure of Aamis, except for reviews that are never quite sure how much of the plot they should discuss. It is a futile exercise, and one that can take away from the experience, especially for a film that provides so much thematic meat to devour that makes film theorists salivating in the theatre a common sight. No one reads M Night Shyamalan films’ reviews for the plot or the premise, they read them to see if it works. And Aamis works like a charm.

It follows Nirmali (Lima Das), a married paediatrician stuck in the lonely monotony of her daily life with a husband who is more often away than in town, and a young PhD student Sumon (Arghadeep Baruah) who is an unusual food enthusiast (his research paper is on meat eating habits of North-East India). Meat plays a bigger role in the film than one would think. In fact, the two people bond over their love for unusual meat dishes, and they are more enamoured than in love at the beginning. Nirmali is taken by Sumon’s youthful passion for life, he falls for her grace and kindness.

Illicit love has always been a taboo in Indian films, and surely, Aamis explores it at its purest. Bhaskar Hazarika deprives his lovers of the sensuality of touch.

He takes the physicality of a relationship out of the picture and replaces it with love flowing with sexual undercurrents. It allows for parallels to classic tales of love, those of Heer and Ranjha, Shirin and Farhad. Perhaps their embraces felt so euphoric to them because they spent years fantasizing for a simple touch.

Das is mesmerising as a conflicted woman, constantly aware of the guilt and taboo of her situation. She is sensual, gracious and deprived, at the same point, of time. Baruah’s constant cluelessness works for the character of a hopeless lover, who is hell-bent on doing anything to please his lover. However, their love is an unhealthy transaction, much like the many love stories of the legends.

Hazarika explores the ebbs and flows of their growing love in a nuanced manner. The audience barely realises when the story takes a dark turn - where it hits the point of no return. By then the story is too likeable to look away.

The wonderful thematic elements of the first half lead to the dark absurdity of the second. There is a postmodernist twist on everything that is established, and a brilliant movement of the narrative makes the film ripe for analysis and multiple viewings.

The characters quietly go insane together, crumbling under the pressure of society, under the guilt that renders their relationship illicit. By the time it ends, one can only look back and wonder how they got there. Yet everything makes sense.

The cinematography is experimental, and partakes of the gluttony of the couple as well as their fantasies. The editing is euphoric, often piecing together linear and the fantastical with the same thread, being completely subservient to the whims of the script. The colour red is used sparingly in the beginning, while it grows and grows until it takes over in the latter half. The experience itself is one of abject horror and curiosity combined. Ultimately the film becomes a cautionary tale too - a parable of the things people can do for love. It might also just be the greatest PETA ad ever made.