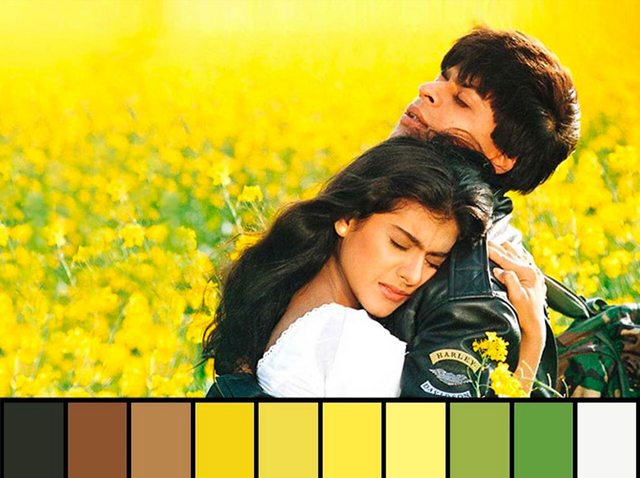 Beyond the obvious yellow that we associate with #DilwaleDulhaniaLeJayenge's mustard fields, there's a bigger role that colors come to play in the film.

Let's take this iconic picture for instance, where Raj and Simran are dressed in black and white, contrasted intentionally and strongly against the yellow. Black is a color which is often used to denote power, strength, authority. White, on the other hand, is the colour of virginity, chastity, purity. So, without your consciously realising it, the film has already established that the man is in charge of the untouched, virginal beauty, who is to be respected for her untainted honour. Simran, in every aspect, is a 'good woman of patriarchy' who will then simply be handed over from one patriarch (the father) to another (lover/husband).

Gender is not the only binary the film invokes. It also draws parallels between East and West and modernity and traditionalism. These binaries are constantly enforced within the narrative, and continue to always influence the characters and their decisions.

The unprecedented success of DDLJ is indisputable, and requires no discussion. Despite the film not having aged well due to its problematic notions (gender, identity, nationality), it did resonate with the audience of its time deeply, as well as those over the decades, before the chatter began around its many aspects.

While the views are deeply contentious now, they came at a point when the reality of a woman under complete control of a 'well-meaning' patriarch was extremely relatable for both men and women. The other thing which made the film stand out for its time was the involvement of the family. Unlike lovers so far, who would rebel and run away, DDLJ shows a character who refuses to elope with his beloved, and instead chooses to work on convincing the father, to make him agree to the arrangement. Of course Simran has little to no say in the plans of elopement or choosing to stay put for it is Raj who is calling the shots, once again enforcing the aforementioned power dynamic.

Now, #MoralRelativism might lead one to question this presentism (using present-day values to critique past events), that it's unfair to pick up an old piece of art, close to three decades old in this case, and hold it up against contemporary standards. In the same vein, who is to say that the views we hold today won't be considered problematic half a century later?

However, irrespective of the side of the argument you locate yourself on, DDLJ remains unmatchable in its fame and a dedicated following.